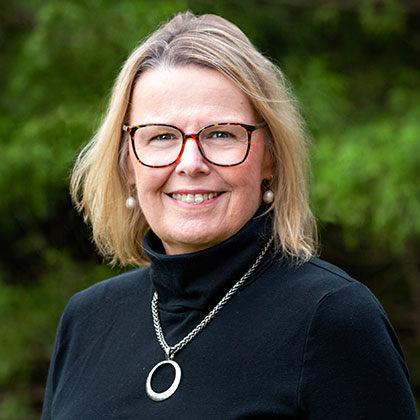 Joan Priddy-Southern graduated from UNC-Greensboro with a bachelor’s degree in nursing in 1983. In 2010, she  received her master’s in nursing from UNC-G and became a board-certified adult and gerontology nurse practitioner.

Priddy-Southern’s career in nursing began in orthopedics at Forsyth Medical Center. She then spent several years working at Wake Forest University Bowman Gray School of Medicine in oncology. Next, she became a home health nurse for CareMark Home Care. During this time, she worked closely with Dr. Richard Rauck to manage cancer patients’ pain in their homes, and has continued to work in pain management under the direction of Dr. Rauck for more than 30 years.

Beginning as a staff nurse at Wake Forest University Bowman Gray School of Medicine in anesthesiology, Priddy-Southern advanced to became a certified research nurse coordinator in January 2000. During this time, she helped launch The Center for Clinical Research (CCR) in Winston-Salem with Dr. Rauck. After 10 years as the director of Clinical Research for CCR specializing in pain research, she returned to graduate school and received her AGNP-C.

Priddy-Southern continues to be involved in drug and device research studies as both a principal investigator and sub-investigator. Most recently she has become a certified health and wellness coach and added an employee wellness program to the practice.

She is a member of the Pain Society of the Carolinas, American Academy of Nurse Practitioners and Sigma Theta Tau, Nursing.

Priddy-Southern is married with two daughters and six grandchildren.